Of all the stations established a cross the Shangani River, Somakantane was favoured by the Lord, in that ln 1960 Nathaniel Mpofu came to teach at Sipemba Primary School where her got married to Julia Sibanda. He had already met the Lord at Ingwenya Mission. He then preached that gospel at Sipemba and Somakantane area. He was then deployed at Somakantane in 1963 to open a Free Presbyterian Church of Scotland school. This was the beginning of preaching of the gospel in earnest, as the school was under his Headship. 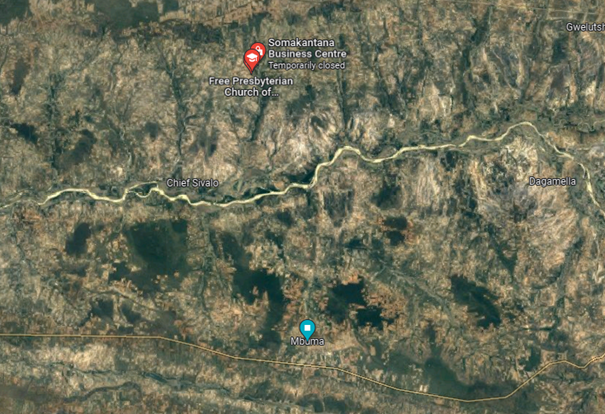 Mbuma area with the Shangani river in the middle of the picture and Somakantana opposite the river.

With the support of locals, Mkhulunyelwa Ndimande and Msweli Tshuma, Mr Mpofu got assistance from Mr Van Worden of Mbuma Mission to put up a church building. By God’s grace the church survived the ravages of the liberation war in that whilst other public structures were demolished not even a single brick of the building was touched.

Several members were admitted to the church notably his wife Julia, Mjobhi Ncube, Nzomba Dube, Mrs Zeblon Mpofu, Mrs Rachel Aaron Sibanda and Mrs Makhanda Ndlovu. Mr Norman Khumalo, Mr Aaron Dube and Mr Elijah Mpofu with their wives were also members. From 1963 communion services were held on the last Sabbath of July. Members from Somakantane, Sipemba and Makhwatheni being responsible for making arrangements, are joined by those from the Mbuma side of the Shangani. Whilst there have been notable additions in the Makwatheni congregation, the Sipemba congregation is now non-existent, due migration to cities, death and with a few joining other denominations.

In his report to the Synod in May 1965, Rev P Mzamo wrote, “Last winter Roman Catholics have been trying to catechise people around our schools across the Shangani River. At Somakantana School where Mr Nathaniel Mpofu teaches and conducts services, we had a chance to talk to two young African men who were appointed to catechise. We warned them of the danger to their own souls and the souls of those they instruct on such damnable heresies”.

The war of liberation only disturbed the means of Grace in this place but did not extinguish the flames of the gospel. As the war intensified Somakantane Immediately Schools was burnt down, Mr Nathaniel Mpofu immediately left for the city, and church services ceases for a while. In 1979, before the war ended, with the return of Mr Nathaniel Mpofu from Bulawayo, and Mr Albert Sibanda, who had been a member of UCCSA, came to settle at Somakantane, church services resumed smoothly as the church building had not been destroyed. enabled the smooth resumption of earnest preaching by Mr Nathaniel Mpofu after the war leading to the holding of Communion services in the mid-1980s up to this day, on the Lord’s Day which falls on the second weekend of August.

However, of late besides the Corona virus there have been other challenges to the work of the gospel. The roof of the church building was recently blown off by the wind, making the building unusable. The walls are also badly cracked. Church services are conducted in a classroom, with permission from the School Development Committee and the Head. It has to be noted that the school is no longer under the Free Presbyterian Church of Scotland. As Communion services have resumed in Zimbabwe, the church building need urgent repairs for it to be ready for use by August, 2022. Even now, on the Lord’s day the services are held with the disturbance of Pentecostal churches, who also use other classrooms at the school, with their drums and other instruments. It’s quite a challenge.

To make matters worse death has robbed the church most members such that only 6 members have remained and among these one is old and seldom attends services due to old age and ailments. With only one member gainfully employed and one adherent a pensioner it’s quite difficult if not impossible to renovate the building.