The same yesterday and today 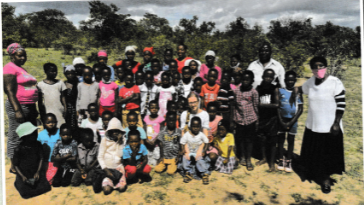 The Bible days, which normally would have taken place in August, had to be cancelled this year because of the Covid pandemic. In spite of the measures in place, we managed to hold the programme in December 2020. Once again, Clara Boer was in Zimbabwe for the programme, and here is her report of those days.

Salibonani! The enthusiastic greeting came from the lips of around 950 children that we took in for the Bible days in December. Because of the group size being limited to 100 children a day at most, the volume was lower this time, but that did not detract from the cordiality of the greeting.

By God’s grace, we were able to convey His Word to eleven villages by means of four Bible stories. The core text to be learned was Hebrews 13:8, ‘Jesus Christ the same yesterday, and today, and forever.’

Every Bible day is organised according to a schedule. This year, name registration and hand disinfection have been added to the list to run through. After the opening and the recitation of the psalm and text that were to be learned, one of the Sabbath school teachers told the first Bible story of the man born blind. Many teachers find it a challenge to tell a story in narrative form, so they endeavour to do it by means of questions and answers.

Tea time! A bucket of water for the washing of hands, another full of lemonade, and a box of biscuits are neatly lined up. The children already know what to expect. ‘In line, in line!’, they are told. Yet it is not always easy to keep queuing patiently, when you are hungry from having travelled such a distance.

Once the children had topped up their energy with the snacks, it was usually necessary to call ‘Hatshi, hatshi!’ (Subside!) a few times to restore order in the group. To this end, it helps to sing the psalm (in our case, 146) and recite the text, especially when the children know that if they can do it by heart correctly, they will get a bouncing ball as their reward!

The second story, about Lazarus, was told by a staff member or by Keith, the catechist. After this, it was time to colour in drawings. This activity had an enthralling effect and our young guests could hardly stop. Oddly enough, black turned out to be the favourite colour this year. After looking around a bit, I discovered that the reason for the colour’s popularity was that the children wanted to top off the heads of the characters on their pages with frizzy black hair.

In the third story, the children listened to the healing of the ten lepers. This story was of felt relevance to the children, as it could be linked to the contagious coronavirus of the present day.

Now it was time for lunch. However, it appeared the sadza (maize porridge) was not ready yet, so we deviated from the programme and told the fourth story: ‘Suffer the little children to come unto Me, and forbid them not.’ And, yes, on some the sadza took so long to cook that we went outside first to start the afternoon games. Skipping and football are still favourites. The parachute game and the Dutch game ‘Twister’, however, were very popular too, and even the adults enjoyed joining in. We had reason for gratitude that it did not rain on a single day, even though it was the rainy season. Playing makes one hungry, so the sadza with bean sauce tasted wonderful! The locals relish salty food, but sometimes even they found it a little over-salted, and an additional bucket of water was needed to quench their thirst.

To conclude the day, we played a quiz. The group that scored the most points would win a prize, so the motivation was strong. It turned out that the children had remembered the stories well, for they gave the right answers to the questions, which were not always easy. The catechist, Mr Ncube, concluded the day with a prayer of thanksgiving. We trust the Lord that this programme will not just have been an enjoyable day, but that the seed sown might grow up to yield the fruits of grace in the children’s hearts.