Unto you therefore which believe he is precious 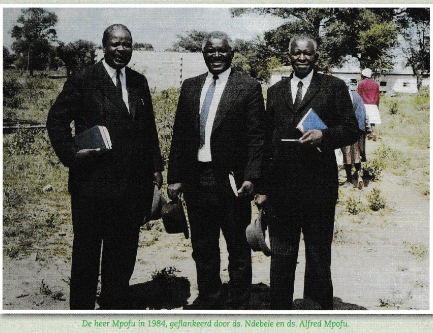 A meeting with Mr. James Mpofu

We read in Job 12 verse 12 that “With the ancient is wisdom; and in length of days understanding.” John Gill commenting on these words observes concerning aged believers “that men well advanced in years are wise; that as they have lived long in the world, they have learned much by observation and experience, and have attained to a considerable share of wisdom and knowledge in things natural, civil and religious,” and this is overwhelmingly true of the man who is the subject of this article; Mr James Mpofu. It is my hope to all the readers of this article that they would get a feeling of what my fellow brethren and I felt upon visiting this very elderly and yet God-fearing man as well as to experience a sense of being in the presence of a man who loves Christ and to whom “Christ is all, and in all.” I write this article prayerfully, asking for the Lord to bless to us this faithful witness and that his life may be an example to us all in living for the glory of Christ all the days of our life which the Lord would have been pleased to give us, so that when the time comes for us to leave this world, it would be a departure to be with Christ, “which,” as the Apostle Paul says “is far better.”

On Tuesday the 5th of January 2021, Mr N. Maseko (Elder in the Mbuma Congregation), Clara Boer and I travelled to Nkayi District to visit one of the oldest living members of the FP Church in Zimbabwe, Mr. James Mpofu. At the time of writing this article Mr. Mpofu who was born on the 26th of September 1930 is 90 years and 4 months old. Several qualities of his character shine forth brightly and yet perhaps the most fitting description which could compound them all and be afforded him is that which is used in the English circles as “a man in full.” By that it is meant an elderly man who shows the proven qualities of strength, courage and graciousness amongst many, and upon arrival at Mr. Mpofu’s homestead we were welcomed with much graciousness and open arms into his home. That which was immediately striking for us all concerning him was his sharp memory because as we were all walking together into his home after being warmly welcomed outside, Mr Mpofu directly and accurately told us the last time he once was with both Mr Maseko and I and the very conversations we had with him! For instance the last time I was with Mr Mpofu was in 2017 in Bulawayo at the annual Men’s Theological Conference and he recited word for word precisely some of the questions and contributions I made on that day as well as all the papers presented by our Ministers. The reason that makes all of this striking and to be more the marvelous is not only the capability of being able to recollect considering the reality of his advanced age but the additional fact that Mr. Mpofu is a blind man, and yet in spite of this he is able recognize an individual by his or her voice and is capable of recognizing every voice of every person he has ever interacted with without difficulty. Already this is a testimony of the grace of God upon his life.

Immediately upon settling down, Mr Mpofu expressed to us his condolences concerning the sudden and unexpected death of Reverend. N. Sibanda as well as the deaths of the many brethren in our congregations and said to us “The Almighty does as He pleases, at the time He pleases; we are only His creation and we must accept and submit to all that God wills.” The last sermon Mr Mpofu recalled Rev Sibanda preaching was at the weekly prayer meeting at his congregation in Nkayi on Psalm 40. He said the Reverend preached a moving sermon on the Psalm and that he preached Christ through and through lifting Him up as the Saviour of sinners. Upon hearing this I was moved to point out in response to how touching it was to hear this because two months before Rev Sibanda died he had said to me “soon I shall be gone and I will be one of those Ministers who just came and went; all I ever want to be remembered for is preaching the Gospel.”

Our discussion shifted to focus upon Mr. Mpofu himself and his life’s labours; firstly upon his work history for the mission and secondly regarding some of his memorable experiences of the Lord’s kindness to his soul as one who is journeying to eternity. Therefore in giving this account of his life, I will use the twofold division given above for the rest of the article below starting firstly with a history of his work for the mission.

Labours for the mission

In the year 1949 Mr Mpofu graduated in his learning from Standard 6 which is the modern day equivalent of the Ordinary Level of education in Zimbabwe (commonly known as O’Level). After graduating, he immediately entered the teaching profession and taught at Mathetshaneni primary school which is right across his homestead. After a year of teaching, he went back to school to train as a carpenter for two years and soon after finishing his carpentry course he went back to the school at Mathetshaneni to teach for yet another year when preparations were being made for him by the Free Presbyterian Church of Scotland to teach woodwork at Zenka Primary School. In the year 1953, he then started teaching as Woodwork teacher at Zenka for 19 years after which he transferred to work at the then John Tallach Secondary School (now John Tallach High School) in the year 1972. Mr Mpofu continued to work at John Tallach as a Woodwork teacher however, during his tenure of work at John Tallach Mr. Mpofu not only had the duty of being a Woodwork teacher but upon being observed by Mr. J Nicholson and Reverend. A. Ndebele for his faithfulness and diligence in his work as well as strictness and discipline with the children, he was approached to consider the additional duty of being a Boarding Master for John Tallach and he accepted the duty in the year 1974. Thus, Mr Mpofu labored filigently as both Woodwork Teacher and Boarding Master until the year 1995 when he retired from teaching at John Tallach.

During the process of his retirement, Mr. Mpofu received a letter from Mr. James Tallach in Scotland informing him of how difficult it had been for the Church in its operations since the death of Mr. David Ndlovu who was the then Transport and Building Manager for the Mission. Thus, the letter requested for him to kindly consider taking up the position. He accepted the position and worked until the point when his eyesight was failing him slowly leading him to becoming blind. Therefore because of his fear of being involved in an accident or that of endangering the lives of others by his growing disability; he formally tendered in his resignation in August of 2005. One can observe that since the days of his youth Mr. Mpofu worked diligently and wholeheartedly for the mission for a total period of 44 years. In his own words Mr Mpofu expressed his personal feelings regarding working in the Mission by saying “It was very satisfying to not only experience a righteous working environment with good working conditions but to work with brethren in Christ.”

When giving this informative account of his labours, Mr Mpofu expressed thankfulness for the Lord’s goodness upon his life and that the only weakness he is experiencing is with blindness but with regards to his whole body he has no other disability or ailment and he marveled at the wonder of God’s grace in preserving his life and keeping his body strong till this very age.

Mr. Mpofu was full of praise for the Lord’s kindness upon him in revealing Christ to his soul for salvation. He expressed how the Lord Sovereignly worked upon his heart by the Holy Spirit through the preaching of the Word of God to see with the eye of faith Christ as his personal Savior and therefore being permanently and eternally healed of the spiritual blindness of his soul. He recalled a sermon once preached by the Reverend Donald Ross on the Prodigal son on how the love of God in Christ is shown by the Father’s willingness to forgive a repentant and broken hearted sinner, throwing himself or herself upon the mercy of God alone for pardon. He recalled another sermon from Reverend Ndebele concerning Hebrews 9:27, and how he was touched by his sobering appeal to all who were present that day that death is a reality but more of a reality beyond death is the judgement thereafter and the question was put forth “do you have Christ as your Advocate and as your Redeemer?”

Clara went on to ask Mr. Mpofu which text from the Word of God has touched him the most to which Mr Mpofu responded with a very warm smile followed by a response in a joyful tone “I have two.” The first text which he said he treasures deeply is Ecclesiastes 12:1 “Remember now thy Creator in the days of thy youth, while the evil days come not, nor the years draw nigh, when thou shalt say, I have no pleasure in them…” To him, the reality dawned more and more upon his soul throughout his entire 90 years of life in this world that most blessed people in this world are those who have the Lord Jesus Christ as their Savior and walk daily with Him by faith, “this,” said Mr Mpofu “is what it truly means to Remember your Creator, and far more profitable it is to remember the Lord whilst you have strength, whilst you have you mental faculties, whilst you have life in this world.” The second text to which Mr. Mpofu referred to was Luke 24:29 “But they constrained him, saying, Abide with us: for it is toward evening, and the day is far spent. And he went in to tarry with them.” He spoke on how the Lord’s people are as these men on the road to Emmaus, that a true believers heart burns in love towards Christ when hearing His word and walking with him in this life and that like the disciples, a believers eyes can only be opened by God the Holy Spirit to see Christ. Mr Mpofu expressed how he often prays for believers in the Church to see how precious the Lord Jesus is so that they love Him more. He further went on to share how he has a special concern for the many who could be in the church and yet unknown to us are hypocrites, he prays for their repentance and that their blind eyes would see how willing Christ is to cleanse them from their iniquity, only if they repent and confess their sins.

Every moment spent with Mr Mpofu was precious thus we found it difficult to depart from his presence because we were being fed with his knowlegde concerning the things of this life to which he applied spiritual wisdom which I feel we shall never forget and I hope that to the best of my abilities have tried to share with you dear reader in this article. Much more could be said which has been left out nevertheless I hope what has been written will show us that “Unto you therefore which believe he is precious…” 1st Peter 2:7